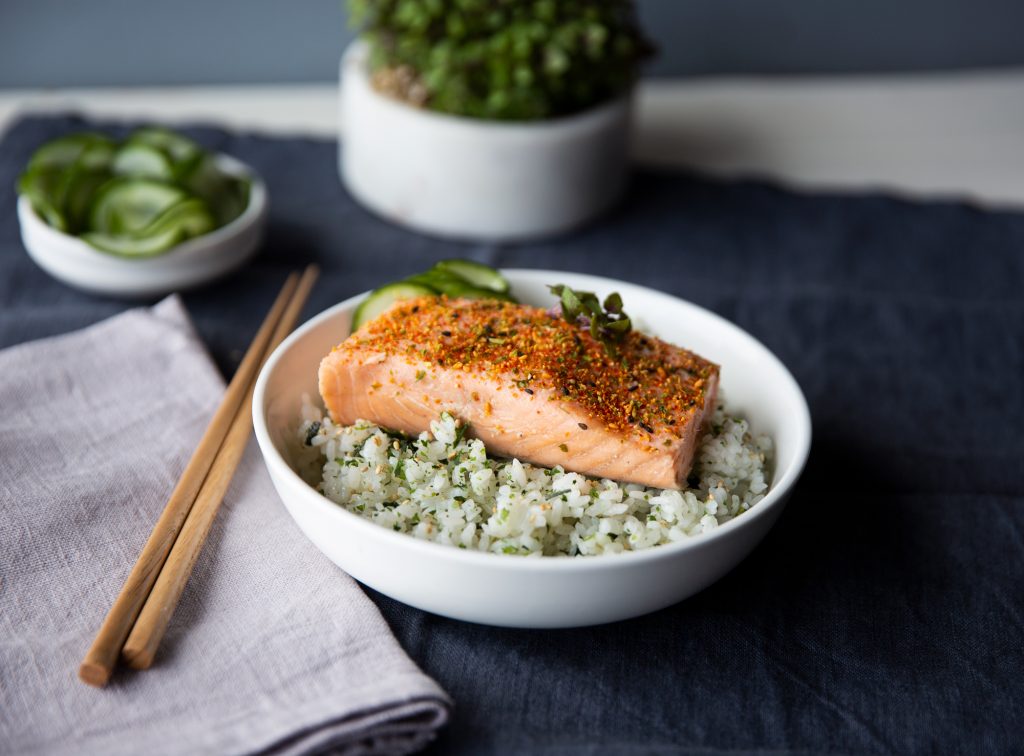 Posted at 00:00h in Uncategorized by admin

At the Essential Ingredient we have been steadily growing our range of oriental ingredients, with new favourites including Tasmanian grown shima wasabi, a range of premium soy and fish sauces, and nori komi furikake rice seasoning – to name but a few.

It is said that the food of Japan speaks of the importance of clean flavours, simplicity and an appreciation for the ‘fifth taste’ – umami– the perfect balance of a little salty, a little sweet, a little sour, and a lot of savoury that is found in many dishes around the world. The discovery of umami is credited to the Japanese chemist Kikunae Ikeda, who, in 1908, conducted an experiment that ultimately isolated the rich savoury flavour in dashi – the bonito and seaweed stock that provides a base for many Japanese dishes.

Umami is, however, found in many other ingredients. Miso, a traditional seasoning made from koji, soybeans and salt, is a flavour-packed secret weapon in the kitchen. Naturally high in umami, it has dozens of applications – from making a wholesome soup, mixing an umami-packed marinade, creating a rich salad dressing or adding a hint of salty flavour to your sweet bakes, miso is a flavour bomb.

Our range of Meru Miso is not like any other product on the market.   Made from Australian biodynamic & organic ingredients by hand, using traditional methods and techniques, Meru Miso is individually handcrafted in small batches with limited use of industrial machinery resulting in a traditional chunky miso with loads of texture.

Another flavour sensation, yuzu, is a delightful citrus fruit from a tree known for its large spikes. With its flavour that is similar to grapefruit with overtones of mandarin, yuzu is a popular and common ingredient in Japanese cuisine. It is widely used to flavour ponzu (a commonly used condiment) and in making yuzu koshō, a fermented Japanese seasoning that mixes yuzu peel, green chilli peppers and salt that is eaten with nabemono dishes (Japanese hot pot), miso soups and sashimi. Yuzu has limitless possibilities however, with applications varying from ‘lemon’ tarts, in salad dressings, and any number of tempting drinks and cocktails.

Across the sea from Japan, Korea has a distinct food culture, with popular staples including the fermented cabbage dish kimchi, bibimbap (a meal comprised of rice, mixed vegetables and meats), and Korean barbeque becoming popular in the Western world. Accompanying many Korean dishes is Ssamjang, a spicy fermented bean paste that David Chang refers to as a love child of two Korean sauces – daenjang (funky miso) and gochajang (spicy chilli paste). Ssam -meaning wrapped and jang – meaning thick sauce is an essential part of Korean BBQ, and farmers during work hours would enjoy wraps with leafy vegetables from their fields. Ssamjang has traditionally been served with ssam which has been part of Korean cuisine since the era of the Three Kingdoms (57 BC – 668 AD). Eating ssam with namul (vegetables side dishes) was a tradition on Jeongwal Daeboreum – ‘Full Moon in January’ – one of the 4 major traditional holidays.   They believed that opening one’s mouth wide and eating a big wrap was a symbol of luck coming into their household and the ssam should be slathered liberally with the ssamjang.